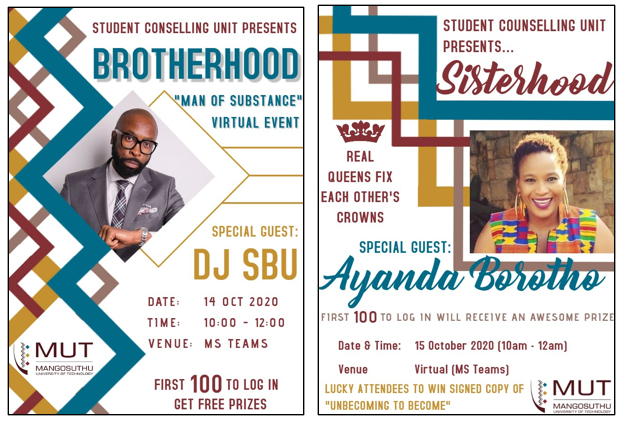 On 14 and 15 October 2020, the Department of Student Affairs hosted its annual Sisterhood and Brotherhood programmes online. Dr Paulette Naidoo, the Director: Student Counselling said they did not want to “disappoint” the students, and decided to use technology to run the programmes.

The theme of the Brotherhood session was “Man of Substance”. The theme aimed to encourage young males to consider the values, principles and behaviours that constitute a ‘man of substance’. “The Student Counselling unit is particularly concerned about rates of GBV, alcohol and drug abuse, and the tendency to give in to peer pressure, and engage in negative activities which can adversely affect one’s academic progress at University,” said Dr Naidoo. The guest speakers were Sithembiso Ndlazi from the South African National Council on Alcoholism and Drug Dependence (SANCA), and serial entrepreneur, Sbusiso Leope (popularly known as DJ Sbu).

The speakers advised students about respect for themselves and others; be authentic and true to oneself as opposed to giving in to peer pressure and negative male stereotypes; have the right priorities; and hold oneself and other males accountable for irresponsible and unjust behaviours and actions, like alcohol and drug abuse, and Gender-Based Violence.

Students who attended the event emphasised the need for more frequent Brotherhood sessions that continued to focus on male mental health, poor help-seeking behaviours, and alcohol and drug abuse.

The Sisterhood theme, on the hand, was “Real queens fix each other’s crowns”. The event sought to highlight the need for women to look after each other, and not let each other down. Dr Naidoo said they expected the MUT female students to inspire each other by doing what is good.  “This is especially important in the context of GBV, where women need to build each other up and collectively stand against GBV perpetrated against women” said Dr Naidoo. Guest speaker Jabulisile Langa, Site Manager at Thuthuzela Care Centre, an affiliate to the National Prosecuting Authority (NPA), emphasized the importance of female codes of solidarity, loyalty and respect for each other. Jabulisile also informed the students about the resources they could utilize to educate and support each other. The Thuthuzela Care Centre is at Umlazi Township.

The second Sisterhood speaker, Ayanda Borotho, an acclaimed actress, former model, author and motivational speaker; emphasized the importance of females reflecting on and confronting their own pain and underlying insecurities which manifest in the ‘degrading and dethroning’ of female peers.

Ayanda reminded students that they “cannot heal what we do not reveal”. She challenged the female audience to interrogate what the concept of ‘sisterhood’ embodies, and to strive towards creating ‘sisterhood spaces’ where aspects such as solidarity, inclusivity, safety and security, honesty and pen-mindedness could be nurtured and expressed collectively.